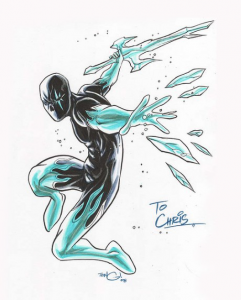 The illustrations for our May 2017 concert programme (now available on our Repertoire pages) were generously provided by Andie Tong; a brilliant rising star in the world of comic book art who I was privileged to work alongside in 2007-8, where he sketched a wide range of characters at conventions to raise money for the Draw The World Together charity. He is known for his work on books such as TRON: Betrayal, a prequel comic to the movie TRON: Legacy, Spectacular Spider-Man and The Batman Strikes.

Andie is currently illustrating Titan Comics’ Tekken, based on the hugely popular videogame and Disney’s Zodiac Legacy, an illustrated novel created by Stuart Moore and the man responsible for co-creating some of the most recognisable names in comics history (Spider-Man, The Avengers, X-Men, Iron Man, The Incredible Hulk and The Fantastic Four to name a few); former president and chairman of Marvel Comics, Stan Lee.

Malaysian born, Andie migrated to Australia at a young age and then moved to London in 2005. In 2012, he journeyed back to Asia and currently lives in Singapore with his wife and daughter.