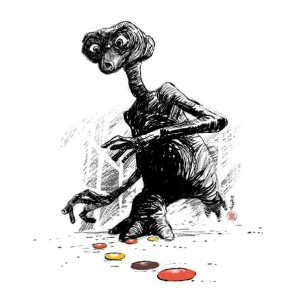 Of all the films Steven Spielberg has given us, it is the story of a boy’s unlikely friendship with a marooned alien that will forever be held in the hearts of audiences. It is perhaps the director’s greatest cinematic achievement, perfect on every level, and a film that will enchant many generations to come. It is essentially a love story, a beautiful fantasy, and when that bike lifts off the ground, your heart leaps with it, every time.

In many ways, John Williams was given a great gift by Spielberg when it came to E.T. You couldn’t ask for a more emotive canvas on which to daub music, music inspired by love and wonder. The gift works both ways though, as the final fifteen minutes of the film owe a great deal to the composer’s own creation, so much so the footage was re-edited to match the music.