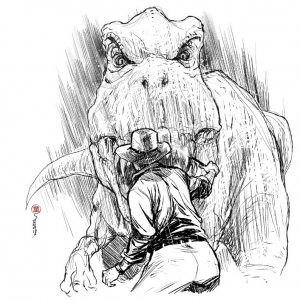 It’s hard to believe that it’s nearly twenty-five years since Steven Spielberg convincingly brought dinosaurs back to life. The film, based on the late Michael Crichton’s complex novel, sees an ageing entrepreneur build a theme park on a remote island where, through stupefying scientific DNA wizardry, he has successfully recreated living, breathing dinosaurs – even the scary ones. No expense was spared in the park, nor on the film as CGI technology successfully recreated these realistic dinosaurs before our very eyes.

For Spielberg’s glossy adventure, Williams crafted a rich score full of thrills, tension and unmitigated wonder. His Main Theme won’t fail to raise the hairs on the back of your neck, its majesty and wide-eyed excitement the perfect accompaniment to ‘An adventure sixty-five million years in the making’.