John Williams is one of the most respected and successful composers for cinema of all time, with an incredible 49 Oscar nominations to date, among them five wins. Born in Long Island, New York in 1932, John Towner Williams was exposed to music early by his father who was a jazz drummer and percussionist for CBS radio and the Raymond Scott Quintet. In 1952 he was drafted into the US air Force where he spent the next two years conducting and arranging music for Air Force bands. He subsequently
studied piano at Julliard in New York, playing in jazz clubs to pay his way. After moving to Los Angeles, he started playing the piano for film studios; here, his long and fruitful relationship with the cinema began.

After receiving his first Oscar for adapting the music for Fiddler On the Roof (1971), he met Steven Spielberg in 1974, their relationship producing some of the most memorable film music of all time – Jaws (the ominous two-note motif still striking terror into swimmers everywhere); ET: the extra terrestrial; Schindler’s List; Close Encounters of the Third Kind; and the Indiana Jones films. 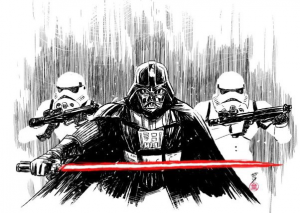 Star Wars needs little introduction; it became a movie phenomenon and made George Lucas a multi-millionaire. With a cast of memorable characters, human and otherwise, the best villain to grace the screen in years and unbelievable effects (and music) to boot, Star Wars was a hit. The first film, subtitled Episode IV: A New Hope, went on to spawn two classic sequels in 1980 and 1983, then, in 1999, the first of three ‘Prequels’. In 2015 we were treated to the first of a new trilogy; set some thirty-two years after Return of the Jedi and in this, Star Wars’ 40th Anniversary year, Episode VIII: The Last Jedi is scheduled for release in December.

When Lucas was getting the first film ready for production, the question of music naturally came up. The director turned to his good friend Steven Spielberg who suggested he speak to ‘Johnny’ Williams. The composer took on the project fresh from an Oscar-win for Jaws and went on to compose another Academy Award-winning score. The music, created in what was an old-fashioned Hollywood mould for full symphony orchestra, elevated the film to an almost operatic level. His beguiling theme for the brave and strong-willed Princess Leia Organa is one of his very best and reappears in the concert version of the Main Theme, which showcases Luke Skywalker’s triumphant theme – one of the most famous melodies yet composed.